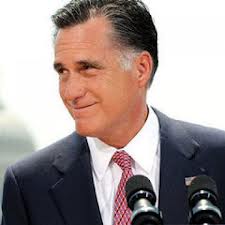 has  a candidate been so open and sincere about buying an election.

Romney Told Bosses to Tell Their Employees Whom to Vote For

By Adam Clark Estes | The Atlantic Wire – 23 hrs ago

Mitt Romney wants your vote. And if you’re a small business owner, he wants your employees’ votes as well and insists that there’s nothing wrong with giving them a little guidance this election cycle. On June 6, Romney led a conference call with support from the über-conservative National Federation of Independent Business and — to cut to the chase — urged the bosses on the call to persuade their employees to vote for him in the upcoming election.

“I hope you make it very clear to your employees what you believe is in the best interest of your enterprise and therefore their job and their future in the upcoming elections,” said Romney in a recording obtained by In These Times. “Nothing illegal about you talking to your employees about what you believe is best for the business, because I think that will figure into their election decision, their voting decision and of course doing that with your family and your kids as well.

Okay, Mitt. You’re right. It’s not technically illegal for employers to tell their employees how to vote. That doesn’t mean that it’s ethical or understandable or even acceptable to connect people’s livelihoods with their political beliefs. There’s a fine line between an employer telling an employee, “Vote Romney!” and a boss telling a subordinate, “Vote Romney, or else!” At least, in the eyes of the inevitably subordinate employees there’s not.

This hierarchical method of political persuasion is turning into a bit of a trend for Republicans this year. Just a couple of days ago, we learned that the Koch Brothers sent their employees a list of people to vote for, or else they could “suffer the consequences.” That was just a few days after the chief executive of a software company told his employees that he didn’t “want to hear any complaints regarding the fallout that will most likely come” if they voted Obama back into office. And a few days before that the CEO of Westgate Resorts and the owner of the largest house in America similarly said that he would “have no choice but to reduce the size of this company” if Obama won. “Whose policies will endanger your job?” he asked his employees.

Mitt Romney’s campaign wouldn’t respond to questions about his proposition from that June conference call. We don’t blame them, either. After all, this is the guy that very publicly said he likes being able to fire people. Combined with the let-me-tell-you-whom-to-vote for proposition, this has to scare the crap out of your everyday middle class American wage earner. Especially the women. The binders full of women.