WHAT IS MINE – Anne Holt

WHAT IS MINE – Anne Holt 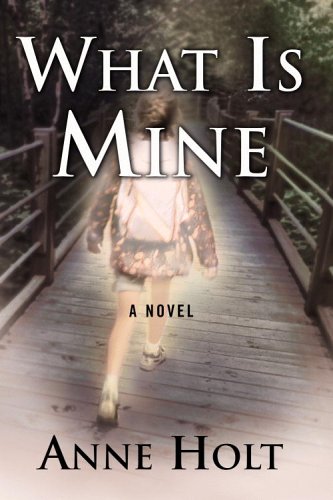 “She was walking home from school.  It was nearly National Day.  It would be the first 17th of May without Mommy.  Her national costume was too short.  Mommy had already let the hem down twice….  ‘Selbu? That’s your name, isn’t it?’…Never talk to strangers.  Never go with anyone you don’t know.  Be polite to grown-ups….’Yes’, she whispered and tried to slip past.  Her shoe, her new sneaker with the pink stripes,sank into the mud and the dead leaves. Emilie nearly lost her balance.  The man caught her by the arm.  Then he put something over her face…An hour and a half later, Emilie Selbu was reported missing to the police.”

WHAT IS MINE is many stories centered on the same theme, the terror that lives in the back of every parents’ mind – the disappearance of a child.

The story also centers on two dedicated professionals who come to the story from different paths.  Johanne Vik is a lawyer, a psychologist and an FBI profiler.  She is deeply committed to proving that a man accused of the murder of an eight year-old girl in 1956 was unjustly convicted.  The story is complicated because Aksel Seier had applied for parole eight times, writing only two sentences, “I am innocent.  Therefore I request a pardon.”

Alvhild Sofienberg’s first job was as an executive officer for the Norwegian Correctional Services.  She was responsible for preparing applications for royal pardons and Aksel Seier’s application piqued her interest.  She sent for all the documents associated with his case and she concluded that he was innocent of the crime.  Seier wouldn’t meet with her, rather unusual under the circumstances, so she attempted to get the attention of those above her in the chain of command.  But the documentation, a yard high, disappeared.  The files were reportedly collected by the police.  And then she was told confidentially that Aksel Seier had been released.  Sofienberg is dying and she wants Johanne to find him, to prove that he is innocent.  The release gave him his freedom but it didn’t clear his name.

Detective Inspector Adam Sturbo wants Johanne to be an advisor, a profiler, on his team.  A second child has disappeared and Norwegians know well that this category of crime isn’t confined to the United States.  Johanne is more than reluctant but Adam isn’t giving up.  And then a dead child is delivered to his mother.

It is generally believed that the kidnapping of a child falls into three categories: ransom, parental custody disputes, and sexual abuse.  But the child’s body shows no signs of abuse, no ransom note was delivered, and the parents are together.  The pathologist cannot find a cause of death.  The police have nothing.  Johanne has nothing.  Then, gradually, Adam and Johanne begin to pick apart the lives of the parents to find common commonalities.

Anne Holt’s story lines include the death of a child in the 1950′s by a man who was unjustly convicted, released without notice, and has not been seen since the day he walked out of prison.  Children are disappearing in present day Oslo and bodies of the children show no cause of death.  The story is told from multiple view points, with changes in time and location, and nothing is lost in the reading.  The author glides from one character, to another location, to a different time without losing the reader at any point.

The book comes together for an ending that is satisfying to the reader and keeps the characters true to the personalities and principles with which the author has endowed them.

WHAT IS MINE is worth reading.