NOW YOU SEE ME 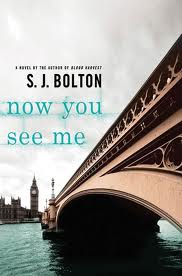 Detective Constable Lacey Flint has been returning to the same apartment complex every Friday night for  months.  She has been trying, without any signs of success, to persuade a reluctant witness to come forward and testify in a trial.  As Lacey walks to her car, she rifles through her bag, searching for her car keys.  When she has them in her hand, she looks up and sees a dead woman holding on to the framework of the car.  The woman is standing, breathing, but Lacey knows that no one can survive for long with the kinds of wounds the woman has.  Lacey calls for back-up and an ambulance but there is no chance that anything can be done for the woman.  When Lacey’s commanding officer, Detective Inspector Dana Tulloch, arrives, she orders Lacey into the Tyvek suit crime scene investigators wear.  Lacey is, herself, a crime scene.  The suit is to protect the evidence of the wounds that are on Lacey’s street clothes.  She held the woman and Lacey is evidence of the brutality.

Lacey is burdened with guilt.  If she hadn’t been looking into her purse, she might have seen the attacker.  If she could see the attacker, the attacker could see her and the woman might not be dead.  DI Tulloch discourages Lacey from thoughts that will only serve to drive her crazy but the next day, when an anonymous letter arrives at the home of a newspaper reporter, it seems there might be a connection to Lacey – her name is mentioned in the letter.

More frightening is the information in the letter.  The killer is re-creating the crimes of Jack the Ripper and this woman, Geraldine Jones, is only the first to die.  The killer seems to know something more about Lacey.  Since childhood, she has been fascinated by serial killers and she is an expert on the Ripper.  The method and the means are a message to Lacey that she can’t understand.  Why?  Why has she been singled out?  As more women die and there is no connection to Lacey, Tulloch and the rest of the team become convinced that the young and inexperienced detective may be in danger.

There have been any number of mysteries and thrillers that have referenced Jack the Ripper but Bolton does it as if the story has never been told before.  The author sprinkles the story with credible clues identifying possible killers.  Lacey’s back story contributes to some confusion about the motive and the method of choosing the victims.  The book is 400 pages and begs to be read straight through and as the story approaches its end, it might be helpful to have a pen and a piece of paper available to keep the confusion at bay.

This is definitely a must read for anyone who enjoys police procedurals that play by the rules but take the reader down unexpected paths.  There are descriptions of the extreme brutality inflicted on the victims but, again,  it would be difficult to be a fan of this genre without having been exposed to the crimes of Jack the Ripper.  It is easy to scan the parts that are too unpleasant and still enjoy the story.

This entry was posted in Uncategorized and tagged bolton, j, jack the ripper, lacey flint, now you see me, s. Bookmark the permalink.

2 Responses to NOW YOU SEE ME