Pekkala is a prisoner in one of the gulags that dot Siberia.  It is 1929 and Pekkala has been a “marker” in the forest for nine years.  His job is to walk through the forest carrying a can of red paint.  When he sees a tree that should be cut down by other prisoners, he puts his hand in the red paint and leaves his mark on the tree.  The average lifespan of a marker is six months.  Pekkala has survived using the extraordinary talents and intelligence that made him, a Finnish conscript in the army of Tsar Nicholas II, to his post as the man closest to the tsar, his chief spy.  He is known, and feared, throughout Russia, as the Emerald Eye.

Alone in the woods for nine years, Pekkala is shocked to discover a commissar in Stalin’s government waiting for him at his hut.  Pekkala is ordered back to Moscow to serve the new government.  Stalin needs Pekkala to find the bodies of the Romanovs so that rumors of the survival of Alexei and Maria, the heir and his sister, can be denied before they undermine the government of the Red Revolution.   There is no one alive who knew the Romanovs as intimately as Pekkala did.  In return for his help, his sentence will be commuted and he will be free to leave Russia and go wherever he wishes to spend the rest of his life.

The story alternates between the time before the revolution and the time after Pekkala is brought from the gulag.  The author brings the royal family to life, particularly Nicholas II.  This is fiction so some of the details aren’t accurate but the changes are in service to the authors vision of the story.  It is a story I know very well. 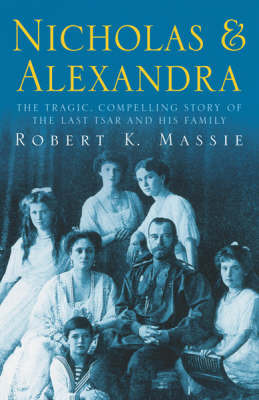 In 1967, Robert Massie published NICHOLAS AND ALEXANDRA, a biography of the last of the tsars and his empress.  Massie approached the book from a most unusual, and fascinating, point of view.  Massie’s son had been diagnosed with hemophilia, a disease passed from mother to son that carries a burden of guilt for the mother.  He became interested in the stories of other mothers and sons and discovered that Queen Victoria had passed the gene onto a number of women in her family.  One of these was the German woman who would marry Nicholas of Russia.

Massie’s theory was based on his belief that Rasputin, the Mad Monk, would not have had the control over Alexandra that he gained were it not for his ability to convince Alexandra that he alone could keep her son alive.  Nicholas and Alexandra were an unusual royal couple; the marriage was built on mutual respect and genuine love.  He could not refuse her when she begged him not to send Rasputin away from court even though Nicholas was being told that his enemies were using Rasputin’s hold over Alexandra as an excuse for getting rid of the Romanovs as rulers of the country.

One of the most interesting chapters in any book is the one in which Massie describes the night when some young royals decided that the survival of their country depended on killing Rasputin.  I used Massie’s non-fiction, brick-sized book as the basis of a course in European history leading to WW I.  My tenth grade students were fascinated by the book and saddened by the fate of the Romanovs.

Sam Eastland includes a timeline of the events in the book down to the use of DNA to identify all the bodies found in the mine shaft.  Anastasia did not survive though the story of her escape and amnesia has kept generations of little girls enthralled.

Because I am picky about historical details, the title of daughters of the tsar was  not “princess.”  They were referred to as “Grand Duchess”.