What makes a good setting? If you were to shelve books by setting instead of by genre or author, some settings — London or New York, for example — would take up an entire wall, while others, such as Bliss, Arizona (where I’m thinking of setting a thriller) would be the width of a folded road map. What’s that about?
Not much, I think. Ninety percent of the time, I’ve come to believe, a setting is just the neighborhood a writer knows best. Back in the 1930s, Robert Benchley wrote a piece called “Mind’s Eye Trouble” or something like that in which he complained that his mind’s eye was stunted — limited to places he’d actually seen — and that this failing affected his reading. So the vast armies in “War and Peace” marched through the residential back yards of Connecticut, where he’d grown up, and Madame Bovary threw herself beneath the wheels of the Hartford Express.
Benchley was exaggerating, but I think it makes sense for many writers to set their stories in, so to speak, one of their neighborhoods. More people have experienced London, over time, than any other English-speaking city in the world, so it follows that thousands and thousands of novels have been set there. “London” books embrace every possible literary genre: everything from Tristram Shandy to sci-fi. London serves them all well.
And that’s because London has, from a fictional perspective, everything: teeming millions, history, beauty, ugliness, palaces, hovels, angels on the churches and shit in the street. Same goes for Los Angeles or New York, Rio de Janiero, any big city. Small towns worked for Faulkner and Trollope and work today for James Lee Burke and — well, you supply a name.
Bangkok, where I’ve lived part of every year since 1981, works fine for me. I can’t claim to know it exhaustively (not half as well as, say, Christopher G. Moore, who created the western-private-eye-in Bangkok and writes it better than just about anyone), but I don’t have to be the guy who’d get chosen to write the Encyclopedia Britannica article on Bangkok. Why? Because my
Bangkok — like Chandler’s Los Angeles or Balzac’s Paris or Murakami’s Tokyo or — well, you supply a name — is imaginary.
All settings are imaginary. Ultimately, all settings exist only in the writer’s mind. If you could map them, they would begin in the writer’s mind and end in the reader’s. Authenticity, actual familiarity with the emotional gestalt and physical geography of the place, are tools the writer uses to make sure that the reader’s brain doesn’t reject the setting as nonsense. You don’t want to be like the French writer, raised in the fine-food atmosphere of Paris, who wrote a western in which a bunch of illiterate gunmen sit around a campfire arguing about cheeses.
What makes a setting work is that it resonates with that writer’s imagination. Bangkok is endless, flat, built on water and sinking, choked with people who are unimaginably rich and desperately poor. It’s simultaneously hideous and beautiful, sacred and profane, vulgar and spiritual. It has a terrible government and wonderful people. Once called the “Venice of the East,” it was originally built around a leafy network of placid canals, but it became, in the 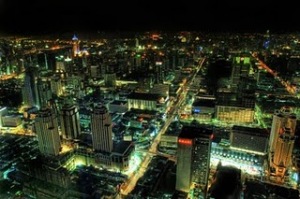 1960s and 70s, a dusty, swinging-door saloon town, sort of Dodge City with sex. Now it’s morphing into one of the world’s great cosmopolitan centers, with a skyline that dazzles even the most calloused traveler.
Bangkok is one of the cities that loose folks roll downhill into. It is, as Somerset Maugham said about Monaco, a sunny place for shady people. Sex of the saddest kind brings some of the West’s most appalling ambassadors, tens of thousands of them, set loose in a place where they think they can behave without constraint. These people may be dull company (and are they ever), but they’re great material. And the Thai people, who put up with all this and sometimes profit from it, are the best-hearted, most sympathetic people I know.
So there’s lots to work with, if you’re me. I could see myself writing about Bangkok for the rest of my life and never even scratching the depth of the possible. If I’m lucky and William Morrow keeps asking for books, I may.
And if, reading my Bangkok, you find the setting difficult to believe, you can comfort yourself with the knowledge that millions of visitors every year feel exactly the same way about the real city.

1 Response to TIM HALLINAN ON THAILAND