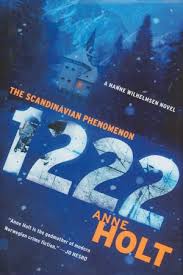 Yesterday was a beautiful day in my part of the world.  The temperature was in the mid-forties and the sun was bright.  But I had survived a train derailment and was riding out a blizzard with hurricane force winds in a century-old hotel in Norway, 1,222 meters above sea level.

The storm against which all other snowstorms is measured is the blizzard of 1978.  The storm was a nor’easter (water is collected from the ocean, travels to Canada, picks up cold air changing  the water to snow and then turns around and drops it all back along the coast again), coupled with a hurricane. It formed during a new moon so astronomical high tides forced those who lived along the ocean to move to shelters.  A winter nor’easter usually brings falling snow for six to twelve hours.  In’78, it snowed steadily and heavily for thirty-three hours; I could not see the houses across the street.

People who experience a hurricane talk about the sound of the wind. Almost thirty inches of snow fell during the storm, but it is the wind that people remember.  Sustained  winds were nearly ninety-miles an hour with gusts of one hundred and ten.  The wind pushed the snow against the houses, building a wall of snow that reached the second story.  The house was under attack and it creaked and groaned and the windows shook so much that it seemed the glass would blow in at any moment.

1222 is a book that hooks the reader from the very beginning.  “As it was only the train driver who died, you couldn’t call it a disaster.  There were 269 people on board when the train… came off the rails and missed the tunnel through Finsenut. A dead train driver comprises only 0.37 percent of this number of people.”  The narrator of 1222 is retired police inspector Hanne Wilhelmsen.  Confined to a wheelchair after a bullet shattered her spine, Hanne is traveling from Oslo to Bergen to meet with American doctors attending a conference. The derailment forces her to share space with the other passengers, far more than an inconvenience for a woman who has shunned people for most of her life.  Hanne is not interested in other people but she is a trained and talented observer.

The blizzard that led to the derailment forces the passengers to stay at the hotel  that was built as part of the station.  It will likely be days before help can reach them.  The storm makes it impossible for helicopters to land.  The derailed train prevents rescue from one direction and the depth of the snow prevents it coming from the other direction.  Roads have been shut by the storm and by order of the government because of the danger to life inhrent in being in the open.  Life in Norway has come to a stop with this “once in a century” storm.

Those skills place her in the middle of events when, within a few hours, the body of one of the passengers is found.  Cato Hammer is a well-known religious leader in Norway.  The majority of Norwegians belong to the Church of Norway but few attend services.  It is highly unlikely that Hammer’s murder has a religious connection.  As the only person with any sort of connection to the police, Hanne becomes the de facto representative of the law.  In spite of herself, Hanne has to admit she misses being involved in the process of crime solving.

The passengers pass through various stages – the spirit of community giving way to boredom and then on to rebellion just  under the surface of polite social behavior.  When a second murder is discovered, polite behavior gives way to fear and anger.  And, always there is the storm, weighing on them, distorting perception.

1222 is peopled by interesting characters and Hanne allows herself to become drawn into their circle.  She does not allow herself to forget that there is a murderer among them.

Anne Holt has written the most atmospheric novel I have read in a long time.  The blizzard is a character in the story.  It’s moods and its moves circumscribe the actions of the humans.  The hotel is staffed, warm, and well-supplied with food.  The goods necessary to sustain life are there in abundance but the means to escape danger are held out of reach by the storm.  Holt’s writing is incredibly evocative.  Whenever I looked up from the book, I was surprised it wasn’t snowing.  In fact, the mood carried through to the morning.  There was half an inch of unpredicted snow on the bushes when I looked out.  Perhaps it was there last night,too.