OF COURSE, THE GIRL WITH THE DRAGON TATTOO

It is unlikely that anyone who has been on-line, glanced through a newspaper, or heard an entertainment report isn’t aware that the English-language version of THE GIRL WITH THE DRAGON TATTOO has become, again, a media phenomenon.  The statistics show that 65 million copies of the books in the Millennium Trilogy have been sold world-wide.  In that the  books run to about 500 pages, this is a feat.  Reviews of the books do not suggest that author Stieg Larsson wrote enduring literature.  He did write a story that, given human nature, will resonate with generations to come.  Larsson was an investigative journalist who wrote often about the pervasiveness of violence against women in Swedish society.

My daughter is coming home for Christmas so on Friday, in keeping with what she dubbed “our” tradition after seeing the Swedish film of THE GIRL WITH THE DRAGON TATTOO, she and her father and I will be seeing the English version.  In another review I wrote that Noomi Rapace would always be the face of Lisbeth Salander.  There is nothing in the trailers of this new version that suggest I will think differently after seeing Rooney Mara in the role.  The brilliant tag line in one of the trailers calls the film “the best feel bad movie of the Christmas season.”  In keeping with that comment, I won’t be posting a review of the movie until after Christmas.

THE GIRL WHO KICKED THE HORNET’S NEST and THE REST

After three books and three films, I am going to miss Lisbeth Salander. She is the rarest of creatures in both book and film; she is unique. She is the product of a creative mind who used the real life experiences of abused women to fashion a woman who doesn’t just survive. She triumphs.

THE GIRL WITH THE DRAGON TATTOO is the most accessible of the three books. It is Mikael’s story more than Lisbeth’s. It is about murder and Nazi’s and the disappearance of a young girl. Lisbeth rescues Mikael, his magazine, and his reputation. But what we get of Lisbeth’s story is violence beyond anything I have seen in a film. The violence on the screen mirrored that in the book so for those who know what to expect, the violence is not gratuitous; it needs to be horrifying in order to understand how Lisbeth has become the woman she is. The film was completely true to the book.

The second book, and the second film, THE GIRL WHO PLAYED WITH FIRE, is the bridge that connects the first and third books. While Mikael is at center stage in the first book, it is not a mistake that the English titles of the books and films begin with “The Girl” There are no stories without Lisbeth and the story that makes up THE GIRL WHO PLAYED WITH FIRE is a story of brutality, cruelty, rejection, and alienation. Lisbeth has been removed from humanity emotionally and, at times, physically. She is locked up in a psychiatric hospital because she tries to save/avenge her mother who has been beaten so badly by Lisbeth’s father that she never recovers. The Swedish government, the covert side of the government, sacrifices a child to protect secret dealings with a spy. Lisbeth doesn’t just have to deal with her father; she has the might and the long arm of the Swedish secret government determined to destroy her. Lisbeth is playing with fire literally and physically. When part two ends, she is near death because she is a threat, not to Sweden, but to the shadows that manipulate all that is good about the country for the protection of their own power. The film is faithful to the book.

THE GIRL WHO KICKED THE HORNET’S NEST begins just where the second installment ends. Lisbeth has been shot in the head. She, silent as always, has somehow found another protector, her doctor, who knows instinctively that Lisbeth needs to be protected from the police and the government minions who will do what ever is necessary to have Lisbeth committed to an asylum for the rest of her life. Did she kick a hornet’s nest or a nest of vipers? Here, again, Mikael steps in to save her from her own worst impulses. Like it or not, Lisbeth knows that her freedom is in Mikael’s hands and she agrees to write her autobiography. The film doesn’t make it clear but the book does – her attorney is Mikael’s sister. As the trial begins, Mikael is using Lisbeth’s autobiography to find information his sister can use in Lisbeth’s defense. In the end, Lisbeth saves herself by trusting someone else. The film is faithful to the book. 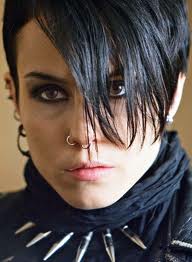 I read a number of reviews of the film version of THE GIRL WHO KICKED THE HORNET’S NEST. Reviews by people who did not read the books bemoaned the ending. Stieg Larsson had written the three books before the first was published. He knew from the beginning where the story was going to end. The films are faithful to the books. Does Lisbeth grow and change over the course of the story? Maybe, a little. But Larsson created Lisbeth as the emotionally damaged, physically and sexually abused victim of the lust for power of a small group of men. Lisbeth’s ability to grow emotionally was pretty much shut down when she was first institutionalized. She has grown to the degree that she allows the doctor and Mikael to help her but Lisbeth is unlikely to go off into the sunset for a happily-ever-after life. Lisbeth is the product of the worst that a human being can do to another human being. Lisbeth is pure intellect paired/ bolstered by the survival instinct.

Lisbeth is also Noomi Rapace. If an American version had to be made, why did they not sign Rapace to inhabit Lisbeth again? Lisbeth is revealed through Rapace’s eyes. She doesn’t need dialogue. It will be difficult to accept someone else in that role. Because the films came after the books, readers had the opportunity to create their own images of Lisbeth. As soon as Noomi Rapace appers on screen in THE GIRL WITH THE DRAGON TATTOO, she replaced the image I had. Playing the second version of Lisbeth isn’t an enviable task.

The books frequently mention that Lisbeth is very small, not much bigger than a child. In the films, there isn’t much done to draw attention to her size until a scene in THE GIRL WHO KICKED THE HORNET’S NEST. Lisbeth is brought into an interrogation room, accompanied by police personnel. In that scene, make-up gone, Lisbeth does appear child-like. It is a visual reminder of how young Lisbeth was when the process of destroying her life began.

Despite the rumors that there is another book that could be released to keep “The Girl” franchise going, it is difficult to see what Larsson might have had in mind. The end of the movie is the end. All the strands of the story are tied up neatly. All the questions have been answered. Even Lisbeth, while not understood, is explained. There are no surprises at the end of THE GIRL WHO KICKED THE HORNET’S NEST. Larsson has treated his characters and his audience fairly. The characters don’t reveal themselves to be other than what we have come to know. The audience/readership was guided step-by-step to the conclusion that Larsson wanted his readers to reach. The real genius of the Millennium Trilogy is that Lisbeth Salander is no less an unforgettable character on the page as she is on the screen.

3 Responses to OF COURSE, THE GIRL WITH THE DRAGON TATTOO