This is one of the most charming and sweet stories I have read.  Christmas is about joy and the people of Thailand know how to rejoice in joy no matter what it’s origin.

Christmas has come to Thailand in husk form, which is to say that some of its least meaningful externals are wildly popular. This isn’t remarkable, considering that 99 percent of Thais are Buddhist, and that they celebrate Buddha’s birthday joyfully each year, meaning that Christmas is — at least as a birthday celebration — an anticlimax as well as being an artifact of an alien religion.
But many aspects of Christmas are completely in tune with Buddhist precepts. Good will to others, peace on earth, generosity, compassion, and charity — all appeal instinctively to the Thais.
What Thais like best in the world, though, is a good party, and Christmas offers opportunity galore for celebration, even if that celebration has undergone something of a sea change in being transplanted to a tropical, Buddhist Southeast Asian country. More than anything, Thai Christmas is an excuse to get together, to dress up, to buy things for loved ones, and to focus on kids. And especially on kids wearing the universally recognizable Santa hat. 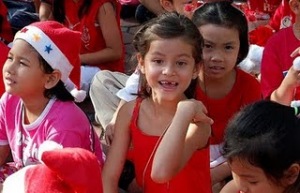 Santa hats are everywhere in Thailand, beginning in November, right through the end of, say, February. You see hats with pom-poms that light up, hats with stars all over them (sometimes
complemented by somewhat witchy crescent moons), hats with nylon fur, hats with pom-poms that squeak or give out a baleful HO HO HO when squeezed. Almost the only thing they have in common is the indispensable red-and-white color scheme. 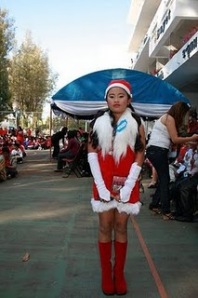 The young woman here is a Thai interpretation of Mrs. Claus, dressed to take part in a Christmas parade. The hemline, the ermine boa, and the long white gloves are Thai improvisations, but the hat is reasonably authentic. I think what I like best about the outfit is the little hand-woven Hill Tribe purse she’s plainly unwilling to entrust to anyone. Oh, and the red boots. I’ll never think of Mrs. Claus again without seeing these red boots.
The Thais are instinctive capitalists, so millions of dollars are spent every year in Bangkok on Christmas decorations for hotels, shopping areas, banks, and other establishments where Christmas primarily signifies a free, if not abandoned, exchange of currency. Even the street markets, which are essentially frameworks of rusted iron poles supporting plywood displays of whatever’s for sale, are framed in twinkling Christmas lights and the vendors try to outdo each other with the most ornate Santa hats. And everywhere, from all directions, you hear the most pestilential manifestation of Christmas in Thailand, a very large choir of tone-approximate children absolutely belting out phonetically learned Christmas music.
Phonetically is the key word. Thais have trouble with words that end in an “s” so they sing about Santa Claut coming to town and White Chritmat. But the song that drives all farang, or foreigners, to the point of contemplating very unseasonal scattershot violence combines the Asian issue with “l”and “r” with a Thai tendency to pronounce the last “l” in a word as an “n.” Thus, everywhere you go, and I mean everywhere, you hear children shrilling Jinger Ben, Jenger Ben, Jinger ah da way.
On the other hand, the kids in person are beyond adorable. Here’s a school parade featuring a crew of totally authentic angels. 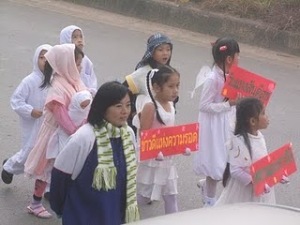 They’re running interference for Mary as she totes the Baby (somewhat unceremoniously), with a couple of sheep bringing up the rear, having apparently strayed from the shepherds. Please send up a prayer of appreciation for the dedicated teacher who’s bundled up in a winter scarf despite a temperature in the mid-nineties.
And down below, to finish this off on a genuine Thai note, are the shepherds the sheep deserted. I’m crazy about this picture (which I didn’t take) because the smiles on those kids’ faces symbolize what I love best about the Thais: a God-given ability to enter whole-heartedly into whatever silliness life presents, extract the maximum amount of joy from it, and share the joy with everyone around them. 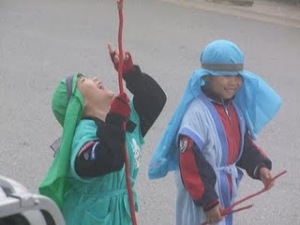 Oh, well, maybe it’s a traditional Christmas after all.