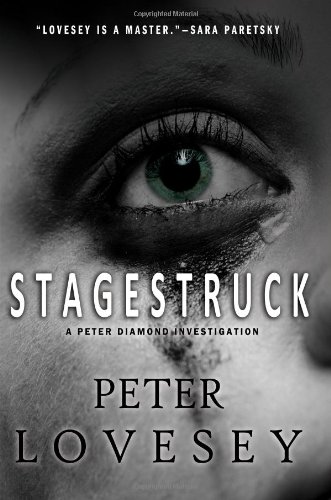 Clarion Calhoun is a rock star whose concerts filled stadiums.  She has performed live and loved every minute of it.  But…rock stars age and fans can be fickle, so it is sometimes necessary to get a name back in lights in an unexpected way.  Clarion Calhoun is a rock star whose curriculum vitae includes “stage training”, although the where and the when of this training is lost in the fog of selected publicity.

The vehicle Clarion chooses as a showcase for her talent is I Am A Camera, the play upon which Caberet is based.  There isn’t any singing in the play but Clarion is convinced that she has the acting ability to produce a better than good Sally Bowles.  The venue she chooses is the venerable and well thought of Bath Theatre Royal, a stage that has seen actors the calibre of Ralph Richardson, Joan Plowright, and Alec Guinness.  Clarion believes absolutely that she is their equal.  That the run of the play is sold out convinces the actress, the director, and the trustees of the theatre of Clarion’s popularity and ability to generate money.

Everything is pointing to the great success of the run, financially and theatrically, until dress rehearsal when a significant problem appears.   People had taken Clarion’s word and that of her manager,  Tilda Box, that Clarion is a natural to play Sally Bowles.  She has the poise, the charisma, the stage presence to pull off the character.  And, yet, the minute she says her first line it is immediately obvious that what she doesn’t have is acting ability.  Clarion couldn’t make it in an elementary school play.  The reputations of the theatre people who have been selling her to the public are going to suffer considerably.

There is nothing that can be done to keep Clarion from being center stage opening night and those who know the disaster that is Clarion the actress have to hope that not everyone walks out.  The play has barely started when, instead of reciting her first line, the star of the show begins screaming and tearing at her face.  Somehow, in some way, a caustic substance has been applied to Clarion’s face and deep burns show immediately.

The case doesn’t, at first, appear to be something the police need to be involved with but  CID Superintendent Peter Diamond is called to the office of the Assistant Chief Constable, Georgina Dallymorek and  told he needs to clear things up at the Bath Theatre Royal.  Dallymore is a member of BLOG, the Bath Light Opera Group, and she has just won a part, albeit in the chorus, in Sweeney Todd.  The Theatre Royal is their venue and problems need to be resolved quickly so rehearsals can begin when I Am A Camera ends its run.  And, as a sort of “by the way”, Georgina tells Diamond that Horatio Dawkins, the newly promoted sergeant who has been foisted on Diamond and his team, is the “movement” director of the play.  In other words, Georgina will not listen to any complaints about Dawkins.  Diamond immediately responds by naming the new member of the team Fred, a name Dawkins knows he better learn to answer to.

Diamond gets a lesson in all things Bath Royal Theatre from Titus O’Driscoll, the dramaturge (the person responsible for the research and development of plays [ I had not come across that word before]).  Titus is a wealth of information about the physical layout of the theatre including the location of the dressing rooms and the way in which  that impacts on the movements of the actors.  He  knows every person involved in the production of  I Am A Camera from director to stage hands.  It is clear that Clarion’s make-up was tampered with and the most likely person  to have  access to that is Denise Pearsall, the dresser.  Most theatre people are proficient in applying their own stage make-up but Clarion is a newcomer and Denise is assigned the job of getting her ready to go under the lights.  There is also Gisella Watling, the understudy who is so good in the role that someone from the National Theatre is coming to assess her talent.  It doesn’t seem that Denise has anything to gain by harming Clarion but Gisella does.

Titus also gives Diamond a history of the myths and superstitions of the theatre.  Titus has an extreme reaction to the sight of a dead tortoiseshell butterfly.  The butterfly is an omen that something terrible is going to happen. Then there is the resident ghost, the gray lady, who is often seen in one of the boxes that overlooks the stage.

This is the twelfth book in the Peter Diamond series, everyone solid in details and very enjoyable to read.  Diamond isn’t as crass as Reginald Hill’s Andy Dalziel nor does he have a sidekick like Peter Pascoe.  But Diamond’s team are good cops and loyal to their boss and Diamond takes care to keep them safe as they work their jobs.  The only thing that keeps this from being a five star entry is that it isn’t hard to figure out the villain but it is a very good book.  Those who haven’t met Peter Diamond are in for a treat.