EYES OF THE INNOCENT- Brad Parks 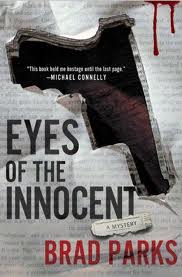 EYES OF THE INNOCENT is the second book in the Carter Ross series after FACES OF THE GONE.  Ross is an investigative reporter for the Newark Eagle-Examiner who is ordered by his editor to take another look at the front page story, a house fire that has killed two brothers, Alonzo Harris, age four, and his six year-old brother, Antoine.  Editor Szanto was encouraged by editor -in-chief Brodie to have reporter Ross find a connection to a space heater, Brodie’s obsession.  Ross doesn’t dispute the danger of space heaters;  lives are lost each winter when the poor, who have their heat shut-off by their landlords, use them to raise the temperatures of their apartments above freezing.  But sometimes fires are not caused by space heaters and Ross isn’t pleased that he is being sent off to prove a negative for the next edition.

Ross is even less pleased when his is ordered to take one of the journalism interns with him.  Lauren McMillan,  a  recent Vanderbilt graduate, is the daughter of Brodie’s golfing partner.  She is called, and answers to, her new name “Sweet Thang”.  Sweet Thang has a major crush on Ross, swearing she entered the profession so she could be just like him.  Ross is not happy; he has to find a way to keep Sweet Thang out of his way and out of his hair without her catching on.

In order to take another look at the Harris fire, Ross and Sweet Thang go to the site.  Sweet Thang enters the burnt out home first; next, Ross hears a scream and discovers Akilah Harris, the mother of the dead children, holding a knife to Sweet Thang’s throat.  Withing minutes, Akilah and Sweet Thang are holding each other and sobbing together over the loss of the children.  Ross knows better than to intrude on the bonding so, when they leave the home for a diner, he lets Sweet Thang take over the interview.  It takes no time before Akilah has told her life story: she is an orphan with no family, she works two jobs to buy and keep her house, she doesnn’t have any friends or family to help her so she has to leave the boys alone when she goes to her second job.  Akilah’s story is a heart-breaking description of the decisions forced on the poor.

Ross realizes that the real story is the sub-prime mortgage scandal and the story is bigger than one house fire although he does not forget the loss of  Antoine and Alonzo.  “They were two happy little faces….with…a set of eyes that captivated me….They were eyes that glowed with hope, love, and happiness.  They were the eyes of two little boys who had never hurt anyone or done anything to deserve this.  They were the eyes of the innocent.”

While the reporters investigate,  a city councilman named Wendell Byers disappears, connections to the New Jersey mafia are suggested, searches for legal documents turn up significant none compliance issues,  Sweet Thang bakes banana bread,  Akilah’s sad story falls apart, and Tina, the city editor, is still reminding Ross that she has chosen him to be the father of the baby she wants to have.

EYES OF THE INNOCENT is a good story that is well-told.  Like FACES OF THE GONE, the story behind the story is that of the poor and powerless in one of America’s oldest cities where greed and politics work against those who fall for the promises of the men in expensive suits who tell the poor that they, too, can have the American dream of home ownership.

I am ready for the third in the series.

1 Response to EYES OF THE INNOCENT- Brad Parks