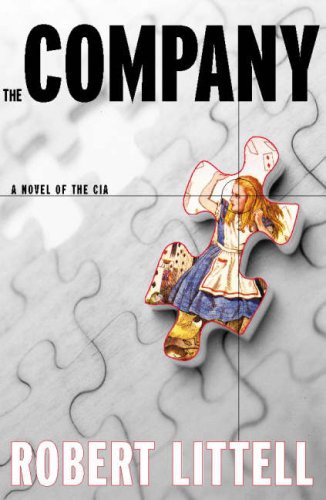 The cover of this book evokes more information about the subject than any other cover I have seen.  THE COMPANY is the CIA, sometimes referred to as the “puzzle palace”.  Some who have been inside the company claim that the mysterious way in which it  works  is akin to throwing its agents down the rabbit hole.

At almost 900 pages, it would seem that it would be ponderous.  It isn’t.  If a 900 page book can be read straight through, I did it.  It is a mix of fiction and fact, and the most fascinating character is James Jesus Angleton, an early recruit  of the OSS,  and a man whose involvement in Cold War spycraft makes him larger than life.

When Angleton worked with the OSS (Office of Strategic Services was begun by Franklin Roosevelt.  Roosevelt appointed General William Donovan,  often referred to as “Wild Bill”, as the director.  After the war, the OSS became the CIA and Donovan continued in his role), he met Kim Philby in London.  When Philby came to the US, he continued to be Angleton’s contact in British Intelligence.  Angleton refused, for a long time, to acknowledge that Philby, Guy Burgess, and Donald Maclean were agents of the KGB.  This nearly cost him his career with US Intelligence.

The movie THE GOOD SHEPHERD was released in 2006 with Matt Damon as Edward Wilson, a character based on Angleton.  A year later, TNT did a three-part mini-series of THE COMPANY.  It did the book no service, but Michael Keaton as Angleton was brilliant.

Angleton makes a cameo appearance in Stieg Larsson’s THE GIRL WHO KICKED THE HORNET’S NEST.  The group at the magazine discuss the possibility that there is a section of  Swedish that could do as much damage to the agency as Angleton did to the CIA.  Some reviewers believe that the head of the group in HORNET’S NEST who wants Lisbeth sent back to the asylum is based on Angleton.

While he was in the CIA, Angleton’s nickname was “Mother” in reference to the notion that nothing happened unless he agreed to it.  At Yale, Angleton studied poetry and was considered to have talent.  The term “wilderness of mirrors” has been credited to Angleton but it may have been first offered by T. S. Eliot.

I read the book 8 years ago.  It makes its appearance on the blog because of all the publicity about spies in the Wiki leaks debacle.  In lieu of my review of the book, I offer some of the reviews posted on Amazon.

Penzler Pick, March 2002: Robert Littell, long known as one of the best writers of fiction about the Cold War, is not as well known as John le Carré or the great Charles McCarry, but nevertheless has a devoted following among serious aficionados of the literary spy novel. His latest book, which runs close to 900 pages and covers the years 1950 to 1995, is an ambitious one that is destined to become the definitive novel about the CIA.

The historical events of that crucial period are well known to most of us. The end of World War II and the division of Germany into sectors by the Allies laid the groundwork for the Cold War and the rise of the OSS, a wartime branch of the American government, into one of the most powerful tools of intelligence.

The involvement of that agency in the defection of Burgess and MacLean from Britain to the Soviet Union; the Suez Canal crisis, which ended Britain’s role as a superpower; the Bay of Pigs fiasco and the Cuban Missile Crisis; the arming of rebels in Afghanistan to repel the encroaching Soviet forces; the Gulf War–all are well documented here.

All these events, which had such major consequences for our own history and that of the world, were well known to, organized by, or played out with the full cooperation of the CIA. These, as well as such minor events as defections on both sides, are the backdrop to this novel which stars a large cast of characters who we get to know as young men and women recruited while still in college. Their personal and public lives are followed as they rise through the ranks of the Company, and we know that one of them is a mole. We don’t know who it is any more than the CIA does, and it will take years to unmask the traitor.

In the meantime, we have become involved not only with Littell’s fictional characters, but also with some of the real people who inhabited that world: William F. Buckley Jr., G. Gordon Liddy, William Casey–and we are privy to conversations in both the Kennedy and Reagan Oval Offices.

We also know by the end of this exciting story that the fight is not always the good fight. Compromises are made, mistakes happen, and pragmatism wins out over idealism. We do not live in a perfect world, but it’s the only one we have and it is that way because of the events in this book. Don’t let its size deter you. This is nothing less than a stunning historical document. –Otto Penzler –This text refers to the Hardcover edition.

*Starred Review* If le Carre is the Joyce of spy novelists, Littell is the Dickens. Le Carre’s focus has always been internal–spying as a metaphorical search for identity. Littell, on the other hand, wants to represent the entire espionage landscape on his canvas, the social and political aspects as well as the psychological. He’s done that superbly, from The Defection of A. J. Lewinter (1973) through Walking Back the Cat (1997), but never in as much detail as in this nearly 1,000-page magnum opus, the spy novel as epic. Seamlessly mixing real events and real people with the story of four fictional spies, Littell presents the history of the CIA, from postwar Berlin to the present. As we follow the intersecting careers of three Company agents and one KGB operative, we see the major events and personalities of the cold war from the inside: Kim Philby, the Hungarian revolution, the Bay of Pigs, Russia versus Afghanistan, the fall of the Soviet Union. As Littell tells it, the story of the cold war is an Alice in Wonderland-like saga of multiple U.S. fiascoes leading inexplicably to a most peculiar victory. Littell, like le Carre, understands the slippery moral slope on which all covert activity rests, but he retains a clear respect for the cunning and bravery of the men and women who live in the shadow world. Has America’s post-cold war “softness” created a vulnerability to terrorism, or has the spy’s “wilderness of mirrors” undermined our common humanity? Littell finds evidence for both positions in an utterly captivating novel that is as disturbing as it is awash in every kind of ambiguity. Bill Ott
Copyright © American Library Association. All rights reserved –This text refers to the Hardcover edition.

As it happens, this longest spy novel ever written turns out to be one of the best. — Chicago Tribune

Compulsive reading from start to finish — The Boston Globe

Hugely entertaining…a serious look at how our nation exercises power…popular fiction at its finest. — The Washington Post Book World

If Robert Littell didn’t invent the American spy novel, he should have. — Tom Clancy

Reads like a breeze…guaranteed to suck you right back into the Alice-in-Wonderland world of spy vs. spy. — Newsweek

3 Responses to THE COMPANY – Robert Littell