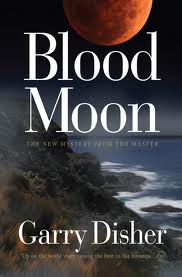 Maine Colonial offers a review of an outstanding series from Australia.  Garry Disher is an author worth finding.

The setting of the Hal Challis series is always a player in these titles. The towns Challis and his team police are working class, but because they are also on the water, there are many wealthy people from Melbourne who snap up old beachfront and water view properties and tear them down to build mini-mansion weekend homes. Teens from well-off families descend on the beach area for a week of sun and fun—-including drinking, drugs, sex and troublemaking—-each year when school lets out. Conflicts between the residents and these visitors are featured prominently in BLOOD MOON.

Challis and his team investigate the murder of a government employee responsible for enforcing land-use codes. She has had numerous run-ins with newcomers tearing down old houses, overbuilding and ripping up protected vegetation that interferes with their views. She suspected that her boss accepted bribes from the newcomers. But maybe her murderer wasn’t from her work life. Maybe it was her obsessively jealous and controlling husband.

Also under investigation is the beating of a private school chaplain. The investigators soon find the chaplain has connections to a racist politician and is himself part of an extremist sect. Was the chaplain’s attacker one of the spoiled students who drove another school employee to a breakdown? Someone connected with his political activities or his creepy church?

As they carry out their investigations, the officers deal with a stream of problems caused by the partying teens and with their own personal issues. One officer’s wife has withdrawn from her family after joining the strange sect. Hal is having some adjustment issues with his new relationship with Ellen Destry, a member of his team. Ellen struggles with some old demons. Pam Murphy begins a relationship with a cocky new member of the team, while her old work partner suspects the new guy is up to no good.

Garry Disher writes excellent police procedurals with multi-threaded, but easy to follow plots. He makes his characters very real, and gives us a good sense of his setting, its economy, politics and people. I highly recommend this series. It isn’t absolutely critical to read the books in order.