Cara Black: The Raids on the Marais and the denial by the Vichy Government

Posted on October 8, 2010 by Beth
Cara Black is the author of  books set in various sections of Paris. The series begins with MURDER IN THE MARAIS, the old Jewish Quarter.  Aimee Leduc and her business partner, Rene, are on the cutting edge of internet security in 1990′s Paris but Aimee is easily convinced to pursue her avocation, that of private detective. Her father was a policeman, murdered in a bomb explosion, and Aimee has kept alive ties with her father’s friends and associates in the police.  For readers who like stories that move fast, Cara Black provides the pace without losing texture and rhythm in telling the tale. For those who like to identify with the heroine, Aimee will keep you moving. She is the slim, elegant woman who personifies Paris but she has the dexterity and physical courage of a cat burglar. Aimee spends a lot of time on roof tops. She also apparently spends a lot of time in thrift shops where she finds, seemingly for a sous , perfect clothes and accessories from the best fashion houses in France. I couldn’t relate to Aimee even when I was 15 but I enjoy her adventures, her determination, and her devotion to a father whose love for her she never questions.
MURDER IN THE MARAIS deals with the worst of times in Paris, much worse than the times Dickens created.  In today’s post on Cara’s blog,  MURDER IS EVERYWHERE,  she tells the real story of the Marais and the how it inspired the story in her first book.
So, in Cara’s words: 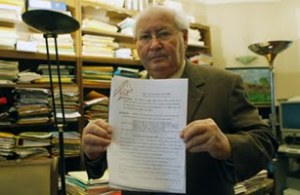 A few months ago I posted about meeting Serge Klarsfeld, the lawyer, historian and Holocaust survivor in Paris. We met in his office on rue la Boétie, as you see above. In this photo he’s holding a newly discovered Vichy document titled “Law Regarding the Status of Jews” just days ago after it was donated anonymously to the Holocaust Memorial in Paris. The document marked “confidential,” in many places shows what experts have authenticated as Pétain’s own handwriting.
The really chilling thing, if you look closely, are the red pencilled notes in Petain’s hand in the margins. In a section defining the professions and activities Jews were to be banned from, Pétain crossed out the exception for “descendants of Jews born French or naturalized before 1860.” This, Klarsfeld says, proves Pétain was responsible for toughening up repressive legislation and ensuring it would be applicable to all Jews — a role that disproves the old arguments in France that Pétain and his Vichy government actually worked to mitigate the Nazis’ anti-Semitic acts as much as possible.

“People have said Petain was just an old man who was manipulated as a figurehead of the Vichy state,” says Klarsfeld, also president of the Association of Sons and Daughters of French Deportees. “This document shows Pétain not only intervened to push legislation against Jews further than proposed, but created an entire anti-Semitic outlook and framework that — in 1940 — was even harsher than what the Germans had adopted.”

Now almost 70 years from the day it became law marks another major step in France’s re-examination of its World War II history. For decades the world viewed France largely as a victim — and resistant — of Nazi Occupation, with only a minority of French people becoming collaborators, efforts to challenge that version of the past began in earnest in July 1995. Then President Jacques Chirac broke with long-standing contentions that Vichy was an illegal aberration that did not represent France and apologized to Jews for “the criminal insanity of the occupying power was assisted by the French state.”

Chirac’s address in 1995 came during a memorial service at the site of the former Vel d’Hiv, the bicycle racing stadium where thousands of Jewish familes, who had been rounded up by French police for deportation to concentration camps, were held for days. The stadium was torn down and now houses a branch of the Interior Ministry.
But Chirac’s speech was the real landmark in the beginning of France’s acknowledgment of it’s shadowed past of collaboration.
Since then, France has worked towards returning real estate, artwork, and myriad possessions stolen from Jews during the Occupation. Last year, in an attempt to help with the process of paying damage claims to victims, France recognized the wartime state’s responsibility for rounding up and deporting some 77,000 Jews from 1942 to 1944. Years too late, say some.

One of the families deported in the Paris ‘Vel d’Hiv’ roundup in 1942 were my friend Sarah’s grandmother, grandfather and aunt. Family she never met whose only trace remains in their names carved on the wall of Remembrance at the Jewish Memorial.
I’ve walked on the street where they once lived and where they were rounded up in the early July morning by the French police. Imagined where the buses, Paris public buses comandeered by the police, waited to take them across the river to the Vel d’hiv. Then to Drancy, the holding camp outside Paris which you pass on the train coming in from Charles de Gaulle airport. Then the long train ride to Poland. I know their convoy number, the date they arrived in Auschwitz. After that the traces go up in smoke.

This touches me right now because that’s the story I told in my first book, Murder in the Marais. Tried to. It hits even harder since I’m revisiting the book for it’s reissue next year. My book came out in 1999 when collaborationist revelations were coming to light in Paris. Strikingly now, with even more of the lingering dark spots in France’s memory of its Nazi history: the question of whether World War I hero Pétain was a figurehead who had been manipulated into representing the collaborationist Vichy regime or a firm believer and active player in its anti-Semitic activities alongside the Nazis.

Klarsfeld says “These October 1940 French laws prepared the ground for the deportations of French Jews as part of the German Final Solution. When you see documents like this showing Pétain and his colleagues had already adopted a clear and harsh anti-Semitic outlook beforehand, it isn’t surprising that Vichy provided the police that were needed to round up and deport French Jews when the Nazis requested them.”
Pétain — who was in his mid-80s when he took the top Vichy post — was tried and sentenced to death for collaboration after the war. That sentence was commuted to life in prison by de Gaulle — in part due to his WWI heroism, and arguments that the elderly Pétain had little real influence in the Vichy regime. Pétain died in 1951. In prison.

This entry was posted in Uncategorized and tagged black, france, reviews. Bookmark the permalink.

3 Responses to Cara Black: The Raids on the Marais and the denial by the Vichy Government