HANGMAN is the nineteenth book in Faye Kellerman’s Peter Decker/ Rina Lazarus series.  Peter is a lieutenant in the homicide division of the Los Angelas Police Department.  Rina is his wife.  They meet in the first book in the series, THE RITUAL BATH.  When they meet, Rina is the recently widowed mother of two young boys.  Over the course of the series, the boys grow up, a daughter, Hannah, is born, Peter unites with his older daughter, 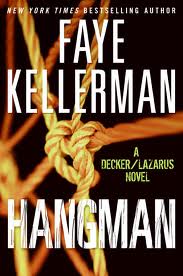 and in HANGMAN,  Peter celebrates his sixtieth birthday.

“The pictures had photographed her swollen, battered, and bruised – a puffy lip, two black eyes, a bloated and bright face.  Decker found it nearly impossible to reconcile those snapshots with the remarkable-looking woman who sat before him.  Terry changed in the fifteen years.  She had morphed from a beautiful sixteen-year-old girl to an elegant, stunning woman.  Age had turned her face softer and rounder with the fragile exquisiteness of a Victorian cameo.  His eyes traveled from the picture to her face.  He raised an eyebrow.”  Decker isn’t surprised that Terry is the victim of violence.

Terry McLaughlin needs Peter Decker in her hotel suite that day.  She is expecting a visit from her husband, Chris Donatti, and his temper and rage might well be aimed at her again.  Decker met Terry and Chris when they were teenagers.  Chris confessed to a murder he didn’t commit in order to protect Terry from having to testify at the trial.  When it was proved that Chris was innocent, he was released from jail.  He and Terry married and had a child.  Chris changed his name from Whitman to Donatti and became a professional hit man.  Chris has supported Terry and their son for the past fifteen years, even paying for Terry to get her degree in medicine.  Chris has been in and out of her life, and Gabe’s, but now she wants a physical separation; she doesn’t want to see Chris for at least six months and she is afraid to tell him.  She tells Decker his presence will protect her from Chris’ wrath.  Decker isn’t sure that anyone can contain Chris Donatti when he is thwarted.

The meeting between Terry and Chris goes well from Terry’s perspective.  She thanks Decker for coming and assures him that she doesn’t think Chris will harm her.  Decker is a witness to Chris’ promise to give Terry the time she needs.   Then, as Decker is driving home, he receives a call from Gabe Whitman, Terry’s son.  He can’t find his mother and she isn’t answering the phone.  He can’t reach his father either.  Peter and Rina realize that Gabe must stay with them until Terry is found.  Chris is dangerous and his son may not be safe from him.

When Gabe Whitman tells Decker that Chris came back to his mother’s suite and that he heard them fighting, Decker suspects that Terry is dead.   Gabe has no illusions about his father but he is convinced that Chris wouldn’t do anything to harm Terry.  Gabe is too young to be on his own and he doesn’t have family with whom he would be safe.  Decker wonders if Terry knew Gabe was going to need a safe haven.

Like all Kellerman’s books, there are two stories.   Decker and his team get a call that a woman’s body has been found hanging in a house under construction.  Hanging is a rare method of murder and the woman, Adrianna Blanc, is an unlikely murder victim.  She is a nurse in a neo-natal intensive care unit, not a role that attracts enemies. But as Adrianna’s private life is examined,  the detectives find that she was not afraid to take chances with people she barely knew.  When cell phone records show a message Adrianna left for her boyfriend, suspicion focuses on Garth Hammerling.  The relationship was volatile.  Frequent break-ups were followed by revenge sex.  Adrianna had relationships with most of Garth’s friends and he knew it.  When Garth disappears, the detectives discover his other life in Las Vegas.  The death of Adrianna leads to complications for the police in two cities.

The Decker/Lazarus books are good stories about good people who try to keep chaos from gaining the upper hand.

This entry was posted in Uncategorized and tagged kellerman, reviews. Bookmark the permalink.