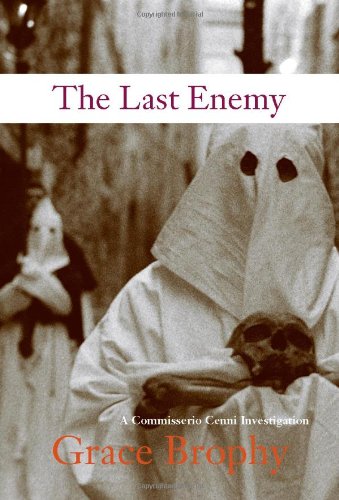 ” A rough wind lifted the decaying leaves that lay in front of the burial chamber and sent them swirling through the iron gates that separate the living from the dead.  Two figures occupied the chamber’s narrow inner space.  The first, a woman, lay face up, her head resting on a stone altar step.  One of the leaves had lodged in her hair.  The second figure, enveloped in the cloak and hood of a pilgrim, bent and reverently removed the leaf.  The woman gazed up at the intruder, as though pleading for mercy or forgiveness, and the figure knelt and applied a firm pressure to the woman’s open eye lids, sealing her eyes in the first ritual of death….The figure then made the sign of the cross over the woman and whispered a benediction in Latin….

It is the evening of Good Friday and Count Casati and his family are waiting for the ritual procession to pass, a procession of men, and women now, who carry the cross as a reminder of the suffering on that momentous Friday 2000 years before.  The Casatis are also waiting for Rita Minelli, Count Casati’s niece, recently arrived from the United States.  Rita is the daughter of the count’s late sister and he was not pleased when Rita contacted him with the news of his sister’s death and the content of her last wish.  According to Rita, her mother wanted nothing more than to be returned to Assisi and reunited with her ancestors in the Casati burial chamber.  The count agrees (how could he not) but is is with dismay that the family slowly realizes that Rita intends to stay, living with the family in the palazzo that she seems to think is her rightful home.

The Casati family, the count, his English wife, Amelia, his daughter , Artemesia, and his granddaughter, Paola, are not enamored of Rita.  She is intrusive and doesn’t know her place; she also has a lot of money, a fact that seems to make her think that she has a right to re-order the lives of the Casatis to her whim.

When the body in the burial chamber proves to be Rita’s, Commissario Alessandro Cenni is assigned to bring about a fast and acceptable conclusion to the matter.  No one said anything about finding the killer.  Rita was unloved by her mother and she is unloved by her new-found relatives but someone must have convinced Rita she was loved.  The autopsy discloses that Rita was pregnant and the pregnancy occurred after she arrived in Italy.

The Casatis have powerful friends in Rome who will do their best to ensure that a family so old and respected should not be treated as if they had any part in such a tragedy  After all, they are victims, too.   The Casatis are noble but cash-strapped; Alex Cenni is not noble but he is rich.  Alex considers that a draw in dealing with the Casatis who don’t usually have to answer questions they find impolite or impolitic.  Rita might have been unwelcome but she didn’t deserve to die.  Cenni doesn’t believe the killing was unpremeditated.  Rita’s murder was planned by someone very calculating, someone who knew Rita could be found at the burial chamber.  Whoever killed Rita, knew Rita well.

Alex’s problem is too many suspects, none with alibis.  He is not helped by the interference of another ranking police officer, Fulvio Russo, who seems to have ties to Rita Minelli and Artemesia Casati.***

Most of the action takes place in the three days at the end of Holy Week.  Grace Brophy has lived and studied in Italy and, thus, should have been aware that Mass, the central part of the Catholic faith, is not celebrated on Good Friday, the only day of the year when it is not.  Good Friday is not the most important day in the Christian calendar; Easter is.  And pity the children receiving their First Communion as part of the installation of a bishop.  They would have gone into the church as seven year-olds and emerged a year older.  When the Catholic church does ritual, it does long rituals.

The best review of the book is to be found on the back cover.

“THE LAST ENEMY,  Grace Brophy’s mystery in an Umbrian setting like no other, serves up more delights that the local pastacerria.   The murder of Italian-American Rita Minelli during Holy Week in Assisi, with its warren of winding alleys, hidden squares and steep cobbled stairways, poses questions for Commissario Alessandro Cenni, not the least, those concerning a 17-th century manuscript, a Croatian immigrant, and a reclusive Contessa.  With pressure from Rome, the Commissario’s own job is on the line.  Brophy’s wry, laser-like insight probes the layers of Italian aristocracy, the police system and the clergy with a sure, deft touch.” 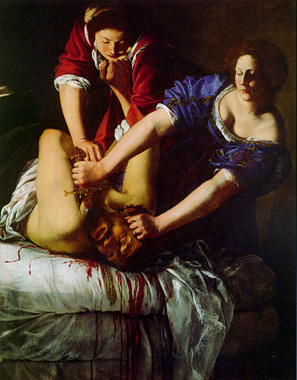 ***Artemesia Gentileschi is frequently mentioned in the story both as the subject of Artemesia Cenni’s famous, if plagiarized, book and as the painter of Judith Slaying Holofernes. The author may have been playing with the readers in that Judith and her servant are clearly not put off by the brutality of their work.

This entry was posted in Uncategorized and tagged art, brophy, reviews. Bookmark the permalink.