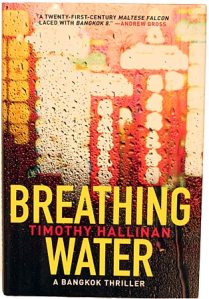 THE QUEEN OF PATPONG, the fourth book in Timothy Hallinan’s Poke Rafferty Bangkok series, will be released on August 17.  This gives readers time to read BREATHING WATER, the third book in the series,  before THE QUEEN captures our attention and our imaginations.

In BREATHING WATER, Bangkok is as much a character in the story as it is the setting of it. In the first eight pages, the author brings to life the worst sins of Thailand, the sexual exploitation of children as well as the kidnapping of infants for sale to Americans and Europeans, desperate for what they have been denied, desperate for what they believe it is their right to have. In the first eight pages, Hallinan grabs the reader and doesn’t let go even when the story ends.

After a rigged poker game goes wrong, Poke Rafferty finds himself committed to writing the biography of Khun Pan, a fabulously rich and powerful self-made man from Issan, the most desperately poor region of Thailand. Poke’s wife, Rose, is also from Isaan.  To her, Pan is a hero because he has grabbed power from the elite who have held it for generations and has offered some hope to people who have never had any.  To others, Pan is a figure of hate and fear and the as yet unwritten biography has the potential to destroy more than a few lives.

Pan wants Poke to write a book about his life as he, the subject, sees it. But Poke is threatened immediately by people who want the biography written their way and he is threatened again by people who don’t want it written at all. Poke soon realizes that Rose and their daughter, Miaow, are in danger and he has to find a way to protect the people he loves.

Hallinan writes thrillers and the Bangkok series does not disappoint on that score. Hallinan also writes literary fiction that tells about the best and the worst in human beings and speaks to the human capacity to rise above the experiences that could be destructive of the soul.  Poke and Arthit, his closest friend and a high-ranking police officer, are decent men who want nothing more in their lives than to love their families and protect their friends from whatever might threaten them. They never fail at the first and, sometimes, the ability to do the second is beyond their control.

Poke is caught between opposing forces who will destroy his family if he doesn’t follow their conflicting demands. Arthit tells Poke he is “…wandering around on the riverbed without a map, and breathing water. You just haven’t realized it yet.” There is a  difference between “breathing under water” and “breathing water”. People have been breathing under water since they first put a hollow reed in their mouths and let the top rise just above the water line. But breathing water is impossible.  To do so is to risk death. It happens when we forget to keep our mouths closed when we dive , when we are distracted and pre-occupied. When it happens,  our physical selves go into panic mode, driving us to get to the air so we can save our own lives. Forced into BREATHING WATER, Poke finds in himself what he needs in order to save himself so he can save the people he loves and the people who need him.

This entry was posted in Uncategorized and tagged hallinan, reviews. Bookmark the permalink.